From the pages of the Defiant, comes the spin-off stories that feature the villains’ point of view.

When a band of supervillains escape super prison deep in the Florida Everglades, they decide to form a team with the express purpose of getting rich and retiring to a tropic island somewhere, anything and everything can happen. It is a no-holds-barred look at supers from the bad guys’ point of view, and anyone who stands in front of them better get out of the way or get fitted for a pine box. 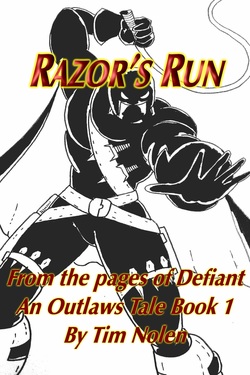 After the events of "It's On Us", Razor and his fellow escapees, on the run and hunted by the legendary Peacekeeper, decide to band together as the Outlaws. After rearming, they head to Cleveland to steal a priceless diamond. It is there that they run afoul of the local hero team, as well as a rival band of villains. Set in the world of the Defiant Stories, this is the first of the Outlaws Tales.
Buy it on amazon 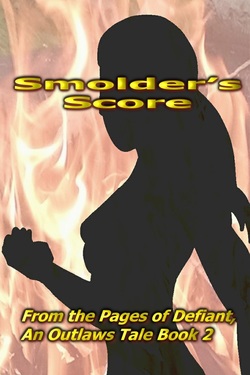 Raveness, feeling lost and betrayed with nowhere else to go and unable to stay with the League, decides to join the task force being formed by the legendary Peacekeeper to hunt down and capture the Outlaws. She arrives in Houston as the Outlaws, led by the infamous Razor, attempt to destroy a political candidate before he can receive his party’s nomination. It becomes a city-leveling war as a local hero, Mecha, adds to the fray. As always, all hell breaks loose in the second of the Outlaws Tales.
Buy It on Amazon

​Peacekeeper, during an attempt to recruit a new member for his Outlaw Task Force, comes face to face with an epic menace. The resulting chaos draws Defiant and his team into the fray as the two hero groups race to save a city from destruction at the hands of a powerful new enemy.
Meanwhile, Bedlam has entered into an underground illegal fight club tournament, open to strong arms only. Razor sees an opportunity to make a massive amount of money by robbing the club hosting the tournament, known as Battle Brawl, as it draws hundreds of the wealthiest people on earth in to wager on the outcome.  Of course, this means going up against the club’s super powered security force, as well as interference from everyone’s favorite computer manipulators, Hacker and Phil. Then of course, the one and only Wrecking Crew enters the tournament as well.
With a cast of dozens of supers, this book has it all, and will have long lasting repercussions for one hero team. A massive tale, with a massive cast…this is Bedlam’s Brawl!
Button Text
Powered by